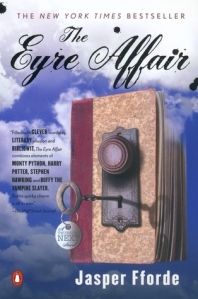 Goodreads Synopsis: Surreal and hilariously funny, this alternate history, the debut novel of British author Jasper Fforde, will appeal to lovers of zany genre work (think Douglas Adams) and lovers of classic literature alike. The scene: Great Britain circa 1985, but a Great Britain where literature has a prominent place in everyday life. For pennies, corner Will-Speakmachines will quote Shakespeare; Richard III is performed with audience participation … a la Rocky Horror and children swap Henry Fielding bubble-gum cards. In this world where high lit matters, Special Operative Thursday Next (literary detective) seeks to retrieve the stolen manuscript of Dickens’s Martin Chuzzlewit. The evil Acheron Hades has plans for it: after kidnapping Next’s mad-scientist uncle, Mycroft, and commandeering Mycroft’s invention, the Prose Portal, which enables people to cross into a literary text, he sends a minion into Chuzzlewit to seize and kill a minor character, thus forever changing the novel. Worse is to come. When the manuscript of Jane Eyre, Next’s favorite novel, disappears, and Jane herself is spirited out of the book, Next must pursue Hades inside Charlotte Bronte’s masterpiece. The plethora of oddly named characters can be confusing, and the story’s episodic nature means that the action moves forward in fits and starts. The cartoonish characters are either all good or all bad, but the villain’s comeuppance is still satisfying. Witty and clever, this literate romp heralds a fun new series set in a wonderfully original world.

This is technically a re-read for me (I first read it back in 2005/2006), but I barely remembered it.  As I was reading there were maybe 2 vague scenes that I remembered but otherwise it was practically like a first read for me.  (I think I also read the second and maybe the third books in this series).

Anyway, I think it is an enjoyable and light read.  Certainly not a scholarly work or anything like that, but still fun.  The concept is quite original. Being able to jump into works of fiction (or have the fictional characters come into the real world) is intriguing. Fforde’s version of time travel is also a novel one, and by the way this first installment ended, it will probably be a theme we will continue to see in the next books.

The idea of historical events happening differently than how we know them to be in the real world is pretty interesting too. I think we’ll see a lot of changes as we see more of the ChronoGuard and their time travel and time disruption.

The majority of the novel was told in the first person but there were a few spots where the narrative kind of went into the third person, but I didn’t think it was deal breaker for the book.  There were some chapters where Thursday was not present and a third-person narrator took over; I am not talking about these parts. There were parts right in the middle of the first person narrative that all of a sudden switched.

I didn’t really care either way that there was a romantic story line in the books; it was pretty predictable but once again, not a deal breaker.

I read a few rather scathing reviews on goodreads and was surprised especially when they said they stopped very early in the book, but to each his own. (if you click on the image of the book, you will be taken to its goodreads page, as with all other book images in my other reviews). I do feel that to give a full, comprehensive review you should read the entire novel.  Stopping after chapter 4 doesn’t necessarily give you good insight into the rest of the story.  However, I can still understand after really giving a book a try it can still be difficult to get past certain points.

I thought the bookworms were a clever addition to the novel, especially when they were releasing commas, hyphens, and apostrophes.

I definitely plan to continue reading the books (I always enjoy reading series).

Have you read any of these books?  Or anything else by this author?  Thoughts?

7 thoughts on “REVIEW: The Eyre Affair by Jasper Fforde”