Well, it took a while, but I did it: I made my first dress! (and thereby fulfilled my sewlution for 2013 — thanks Karen, for setting the Sewlutions up!).

I purchased the pattern at the beginning of January and then bought the fabric and notions a little over a week later.  I washed the fabrics (the main and the lining), and then used some stash fabric to make a mock of the bust:

I put it on to test the fit (I closed the back without a zipper just to get an idea – you can see in the pic above), and was pleasantly surprised with the decent fit!  (I’ve since seen many posts about Sewaholic patterns that praise Tasia for such spot-on measurements).

Then, I waited until the end of March to actually do anything else.  Why, you ask? Laziness, being too busy or too tired and nervous to actually cut up the material to begin!  It took longer than I thought to cut everything out once I started, but I’m glad I did it all in one go. (My back was killing me after though, so that was all I did for the day — not to mention the hockey game was coming on…)

The gathering was going along smoothly, but when I tried to even some of it out, the thread snapped in the middle!! UGH!  I had to remove all the thread and then do it all over again…  (Does anyone know of any tricks for when the thread breaks in the middle of gathering??)

I battled with the idea of a lining for the skirt since it was so full already, and finally opted not to do the skirt part but still did a lining for the bodice.  I think part of the reason I struggled was due to the lining fabric I chose: extra slippery stuff (think a slip that you would wear under your dress or skirt) and that was the first time I ever worked with it.  I bought it because it was actually called lining fabric – I didn’t consider using a different kind of fabric (see? I’m still getting the hang of this whole sewing thing…)

I struggled a little with the sleeves too; I had to shorten them a bit (but instead of cutting the material, I just folded them at the edge).  The first time I sewed them on, they were too tight, so I had to use the seam ripper and re-do them.  (Luckily, that only happened once!)

Those were really my three biggest problems, so all in all, not too bad.  Sometimes it’s better to make the mistakes to learn and be better for next time!

At one of the fittings, fiancé said “You look like Lucy”. haha! 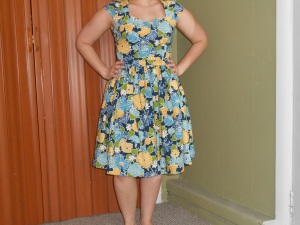 I had to take the pics myself using my little tripod for my camera.  I had the camera sitting on a stack of books (probably about 8 or 9 of them) on my bed, and no matter how hard I tried, the pictures with my head in them looked goofy (the camera was tilted up so it was very unflattering and the lighting looked funny…I think if I stacked anymore books the tower would have fallen over).  I probably took at least 12-15 pictures trying to get it just right. So I just accepted the fact that I’m not a self-picture-taker and just decided to post the pictures without my head! (and I’ll make sure someone is around to help with future photo shoots…) (also, please excuse the ugly closet door – it was like that when we moved in…)

I decided that I would cut back on the amount of fabric for the skirt if I were to do view B again – I feel like it might accentuate my hips a little too much.  Too much gathering, so I would cut out less fabric, I think.

The online tutorials from Tasia were super helpful when it came time to attach the lining and the sleeves.  However, they were much easier for me to understand when I was following along with my material than just reading them while sitting on the couch.

I ended up using stitch witchery for the hem at the bottom of the dress.  I haven’t had much experience hand-sewing and wasn’t sure how to approach it.  Also, the thread that I used for the dress would have showed on the outside of the dress and I didn’t want that. I’m not sure how well stitch-witchery will hold up against multiple washings (I’ve only used it on one other project that I haven’t had to wash yet – a table runner).  Anyone know?

There are a few things I wasn’t too happy about (operator errors), but all in all I’m proud of what I accomplished!  And I plan to make view A – I think in a solid color – plum perhaps.