Karen @ Did You Make That? hosted a pyjama party sew-along this month. She was specifically using Sewaholic’s new Tofino pattern, but encouraged us to join even if we decided to use a different pattern. The goal is to follow along and have pajama pants completed by June 23.

I hadn’t purchased the Tofino pattern (and frankly, from my limited experience with piping, I’m not sure if I want to purchase it – not a fan of piping…) but I still had the pattern from the pajama pants I made in my sewing class last year, so I figured I could do those. I had a bunch of left over paw print fleece from when I made Sonny’s bed, so I figured I should probably use that up (otherwise, it would just sit around doing nothing).

I wasn’t sure how to organize this post, so after some thought I figured I would put it all in one post and break it down by linking to each of Karen’s posts and talking about what I did and my experiences. Since I’m not using the Tofino pattern, some of what I do won’t exactly match up, but in the end we’ll all have pajama pants!

[I’m going to warn you now: this is going to be a long post!] 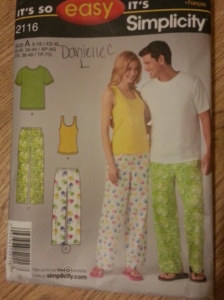 Pyjama Party Preparation
Let’s get that pattern cut out! Last year in the class, I cut this pattern for a size Large but decided to cut out the Medium for this go-around (and I’m happy I did!) 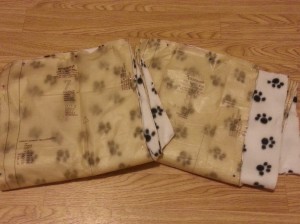 Pyjama Party 1 – The Belt
My pattern doesn’t have a belt, so I didn’t do anything on this “step” but I did read Karen’s post. She uses some great pictures to supplement her commentary (especially on the bit about turning the belt inside out!)

Pyjama Party 2 – Piping & Side Seams
So as I mentioned, I did not enjoy working with piping in my sewing class, but it’s probably just because I’d never done it before. Karen has some great tips about working with piping (maybe someday I’ll attempt piping again). So finally something both our patterns have: side seams! I definitely recommend doing what Karen says and pinning at the ends and  notches first, then in between – it definitely helps keep the 2 pant leg pieces aligned. 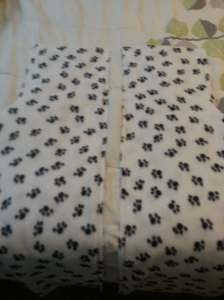 Pyjama Party 4 – Sewing the Crotch Seam
I switched this with the “third step”. In my class, we actually did the crotch seams first, then the side seams and then the inside seam. I couldn’t remember what I had done at first, so I did the side seams, then found the instructions from my teacher. So after the side seams I did the crotch seam. I stitched at each curve, back piece to back piece and front to front. But Karen shares a great tip on how to secure the seam to make sure everything matches up to complete a nice, neat crotch seam in her method. 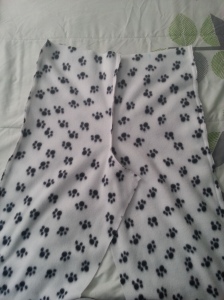 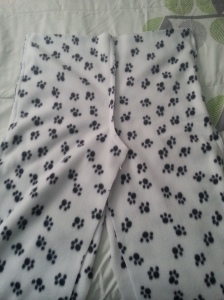 Pyjama Party 3 – Inside Leg Seams
I used the method that my teacher in class showed me because I found it to be quick and easy with only one seam to stitch (from one bottom of pant leg all the way across to the other end). Karen makes a comment that we might think we cut out the wrong size because the pant legs look so big – that’s definitely how I felt when I made these for the first time last year! So luckily, I was expecting that this time around.

Pyjama Party Show and Tell, Plus Giveaway
There was a virtual pajama party show and tell on Friday. Unfortunately, due to the time difference, I wasn’t able to attend. 😦

Pyjama Party 5 – False fly & Buttonholes
Not applicable to my pattern but it was interesting to see how it’s done!

Pyjama Party 6 – Attaching the Waistband
I don’t have a waistband the way this pattern calls for, but I did have to create the waistband “casing” for the elastic band.

Pyjama Party 7 – Waistband, Hems & Done!
I folded the waistband to encase the elastic, edgestitched most of it, but left an opening to put the elastic band in. I used a safety pin to help me feed the elastic through and then stitched the elastic together and sewed up the opening. I also added a little bit of black bias tape to act as a tag. Then I hemmed the pant legs & I was done!

Pyjama Party Launches!
So I didn’t post this in time (I’m posting it the next day). Karen is probably going to wonder why all of her posts are getting ping-backs since I’ve linked to all of them!  And here’s my finished product! (they’re pretty comfy, but certainly not the pjs I should be wearing in the middle of a heat wave!) 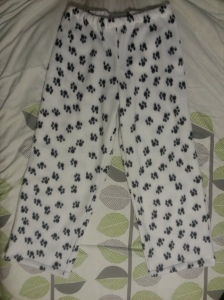 Thanks, Karen, for putting this together – I had fun reading the tutorials for the sew-a-long and going along with it, even though I was doing a different pattern. I’d love to join in again the next time you do one!

7 thoughts on “Pyjama Party with Karen @ Did You Make That?”